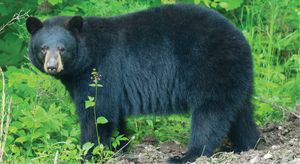 * Bears hibernate up to 7½ months without eating, drinking, urinating or defecating. They have an amazing self-contained system that enables them to recycle their own water and retain bone strength and muscle mass.
* During hibernation, bears’ heart rates become extremely low, but their body temperature remains relatively high so they can wake up quickly to defend themselves if needed.
* Female bears give birth to cubs during the winter months—a feat matched by no other Northern animal. As her cubs feed, she dozes on and off as they await spring.

But my connection with the bear goes much deeper.

Turning 50 was a struggle. Still reeling from my divorce and coming out, I was convinced that my birthday wasn’t worthy of celebration. As harsh as it sounds, I didn’t know if anyone would come to a party. It was too painful to risk.

Linda surprised me with a trip to Asheville instead. On the eve of 50, we went to a fabulous Gillian Welch and Dave Rawlings concert at The Orange Peel (highly recommended!). Driving back up the mountain afterwards, we were the only car on that dark road. As the dashboard clock struck midnight, I began practicing “50” out loud.

Exactly four minutes later, a black bear appeared out of the darkness. She sauntered in front of our car for a quarter of a mile, her backside well lit by our headlights. By 12:09 she had stepped off the road and returned to the woods.

Why had she walked in front of our car so long? She could have easily avoided us on that dark night. Stunned, we looked up the bear totem and discovered that they represent strength and emotional healing.

All at once I felt at peace. I knew healing lay ahead. This mystical bear had appeared when I needed her and shown the way.

I have often reflected on that bear and other unexpected sources of solace and strength. In this complex, intricate world, there is much that we don’t understand. Much that can’t be quantified or contained. Somehow I find comfort in that mystery.

Do you have a totem animal?

Have you had a mystical experience…animal or otherwise?

What will emerge for you as spring arrives?

Thank you for bolstering me…and each other…on the unchartered road ahead,

P.S. Here's a fun video with hibernation facts (click on the photo below). 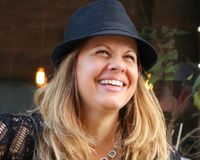 Joy Zimmerman's soulful vocals and original music dance effortlessly from poignant to hilarious to compelling to joyful -- round-trip guaranteed! With folk rock as a springboard, Joy dives into the everyday and the extraordinary. A touring musician based in Kansas City, Joy is a voice of authenticity, hope and joy. 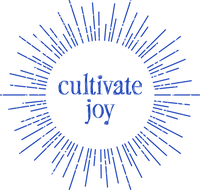